Political and Cultural resistance through rituals: A Sociological analysis of Nerchas among the Muslims of Kerala 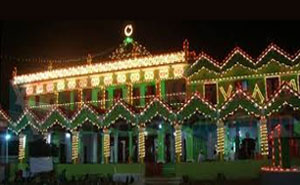 This paper tries to examine the local religious ritual Nercha, which has been celebrated in different parts of Kerala as a manifestation of cultural and Political resistance . Nercha is a religious cultural festival, practicing in the tomb of sheikh and shahid, combining with the local folk festival. It is largely associated with sharing of Islamic tradition with the local indigenous culture. As a ritual Nercha is the elaboration of collective individual practice. According to Gangadara Menon, Nercha is a Malayalam word which means taking a vow and it is derived from Dravidian origin “Ner”, a word with several meanings like truth and agreement. This ceremony includes Varavus, Nilavilacku and local dances like kolkali, daffmuttu etc. (Dale, Menon, 1976). Nercha ensures the participation of different religious communities especially lower caste Hindus in its different practices.  People’s approaches toward Nercha were varied in relation with socio-economic and educational position and their generational, gender and other sectorial differences. The Manifestation of Nercha evolved through various forms associated with the changes in socio-political circumstances. Nercha is seen in many regions of Kerala, among these Kondoty Nercha, Mamburam Nercha, Puthiyangadi Nercha, Ponnani Nercha etc. are the major Nerchas in Kerala. We can broadly classify various Nerchas under two categories, conducted in the name of sheikhs and the other in the name of Shahids. We focus here  on, Mamburam and Pookotoor Nercha to substantiate the manifestation of political and cultural resistance through Nerchas. Kondoty and Mamburam Nerchas are in the name of Thangals (Sheikh Muhmed shah thangal and Sayyed Alwi thangal respectively) with some differences and pookotoor Nercha is devoted for shahids who were killed in 1921 rebellion.

Sociology and Anthropology of Islam
Religion has been a crucial subject matter among sociologists and Social anthropologists, which is  quite elusive and intriguing topic, considered for serious scientific treatments and critical analysis for last two centuries.
Emile Durkhiem described religion and culture together, stating their external signs and symbols are expressions of collective consciousness. He says, religion is the sacralization of society and an expression of people’s collective identity. Malinowiski and Raadcliff Brown developed the structural and functional idea of religion and viewed it as a social framework for the harmonious functioning of Society.
Since later 20th century the interest in religion has been revitalized, examining the significance of religion and the way it provided meaning and influenced socio-political life of modern society.  Various scholars like Clifford Geertz, Hamid Elzain, Earnest Gellner Akbar S ahmad etc were major figures specialized in late-modern religion, especially in anthropology of Islam. Clinton Bennots argues, there have always been a process of flux and reflux in the Islamic tradition which maintained the balance between  high-Islam of scholars with low-Islam of people. These scholars made universal definition of religion based on the anthropological analysis of particular region. Clifford Geertz constructed symbolic system of communication. According to him symbols are used for any object, act, event, quality, or relation which serves as a vehicle for a conception, he adds culture does not have any bio-genetic base and  is learned by shared among the people, transmitting from one generation to next, person behaving according to  cultural demand. His argument and analysis are reflecting on the basis of Javanese religious mystics. He also suggested universal definition of religion.
Post-colonial anthropologist Talal asad disagrees Geertz in many aspects, particularly in the universal definition of religion. According to him religion is a discursive thing, it varies depending social context as well as individual subjectivity. Each context provides its own meaning and each individual adopt their own meaning through manifestation of every religious ritual.
Here we analyse the discourse on Religious ritual Nercha as a manifestation of Political and cultural resistance, a resistencial manifestation of Nercha associated with the culture and History of Kerala Muslims and their interaction with other communities.

Importance of Martyrdom
Another form of Nercha has been practiced in the name of shahids (martys). Many Mappilas had taken the decision to become Shahids which was very political and a decision based on careful analysis of existing social circumstances and they were more aware about its consequences   (Ansari, 2008).Many people have been motivated for martyrdom by the influence of Thangals and belief in their karamath. Thangal was the ultimate source of religious knowledge and role model of their life. People believed that these Karamath is able to solve their problems and even if they lost the fight, they believed Karamath would rescue them. Even today the shahids are significant in the unification and mobilization of people in various socio-political contexts. Political and religious organizations have been using the name of great Tangals, shahids and their glorious histories to motivate people for political purposes. Nercha, consciously or unconsciously symbolizes the form of political and cultural resistance in its manifestation.
Symbolisation of the regional influence of Thangals: Different practices in Nercha like varavus have symbolized the Thangal’s socio-political influence in the surrounding regions. Varavu means, people bringing their contribution and gifts from surrounding regions. In Mamburam Nerchas, presently varavus doesn’t exist, but different programs have been conducted before Mamburam Nercha in the mosques nearby the areas of Mamburam. These mosques were founded by the Thangal of Mamburam who had more influence and power on that regions. Historically, Nercha also expresses the socio-political circumstances in different regions.

The Recent Changes
Different kinds of changes have brought in Nercha, mainly due to the changes in attitude of people towards Nerchas and changes happening in various practices. Many Nerchas disappeared from the place. Many Nerchas removed the practices like Fireworks, varavu, Nilavilack etc and replaced with Islamic speech, Moulid sadass etc. The major causes of changes are
1)    Opposition from reformist movements (Mujahid and jama-athe islami)  against Nerchas.
2)    Gulf migration and Spread of education
3)    Madrasa movement for religious education
4)    The reconfiguring agenda of Islamic rituals by traditional sects of Muslim Community.
The reform movements among Muslims were emerged in 1920s. They considered rituals like Nerchas are against the fundamental teachings of Islam, Which is tawhid (belief in the oneness of god).They campaigned against these rituals among Muslim community. They established schools and Madrasas for providing both Religious and modern education. After 1970, the huge migration to gulf countries was occurred and gulf money boosted different educational and charitable activities among both conservatives and reformists. These socio-economic changes lead to the diminishing of rituals including Nerchas.